Can Wolves qualify for Europe again?

When Wolves returned to the Premier League in 2018, after a six-year absence, fans believed things would be different. Their side would avoid another relegation dogfight. During the Mick McCarthy years, a scrap at the wrong end of the table seemed inevitable. Under Nuno Espírito Santo and the Fosun ownership, a new ambition and drive yields incredible results. A mid-table finish would have been lofty enough in their first top-flight campaign. Wolves reached the semi-finals of the FA Cup, finished 7th and qualified for the Europa League. Supporters remained optimistic this term but neutrals feared a threadbare squad would be stretched thin while fighting on four fronts. So far, it hasn't happened. With the resources available, there is absolutely no reason Nuno and his men cannot repeat last season's feat by qualifying again for Europe.

Wolves play some silky football. The understanding between Jota, Jimenez, Neves and Moutinho makes them a pleasure to watch. However, finding the net this season hasn't proved easy. Progress was hampered by too many draws.

Beaten only twice in 12 games, they picked up seven draws. Three came consecutively prior to the West Midlands derby with Aston Villa. Needing to prove they could grind out a win, Wolves duly obliged. Frankly, the 2-1 scoreline flattered the Villans.

Wins have a huge psychological impact on teams, especially when they signal an end to a dry spell. Wolves' next four league games are all against teams they should beat. Using the momentum from their win over Villa can fuel their push for seventh place. 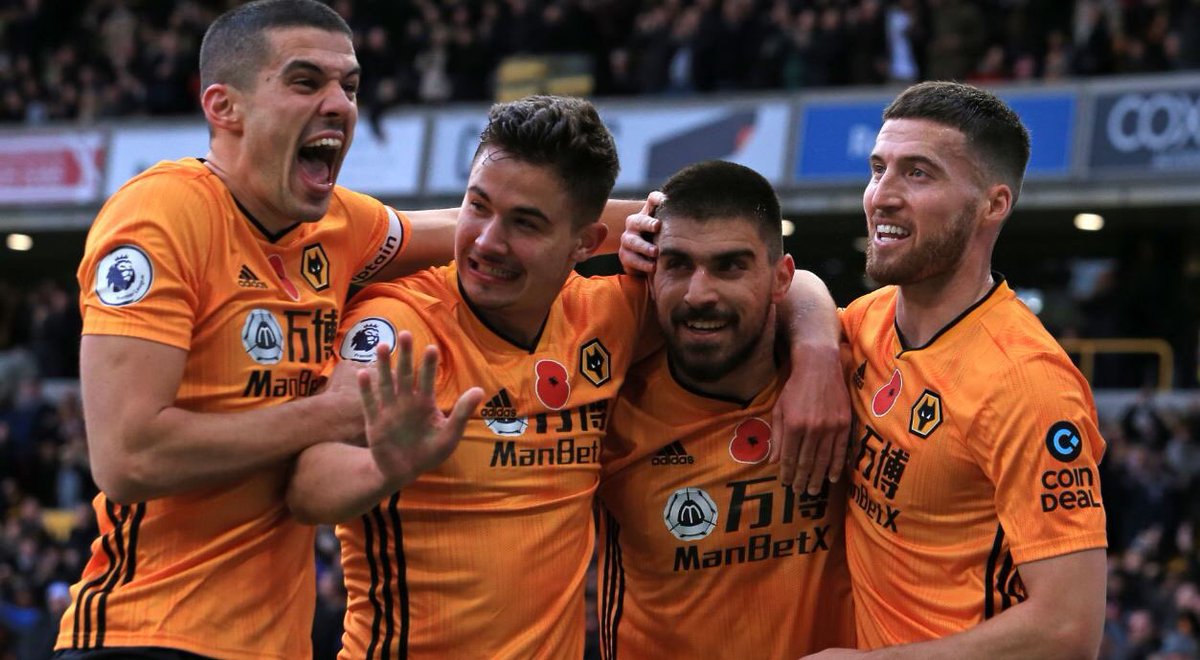 Whereas Leander Dendoncker and Raul Jimenez were snapped up on permanent deals after impressive loan spells in 2018/19, there were no big-name signings. Fans thought Patrick Cutrone might replicate Jimenez's heroics from last season. So far, Nuno keeps him on a leash, still favouring the Mexican. Jordao and Pedro Neto are bit-part players too. On the other hand, Adama Traore is a revelation this season. Finding a rich vein of form, he helps make up for the lack of new blood.

After a disappointing summer when more signings were expected, January might prove an exciting window. Following the international window, Wolves can progress to the Europa League knockout rounds with just one more point. Will Nuno feel the squad needs a bit more depth to complete a deep Europa League run, perhaps all the way to Gdansk?

The question is whether Fosun will pony up the cash? A new striker could lift the scoring weight off Jimenez's shoulders. A defender can shore up the backline after Willy Boly's injury.

AC Milan's Franck Kessie, highly rated Atalanta youngster, Dejan Kulusevski and Huddersfield's Karlan Grant are grist in the rumour mill. Chairman Jeff Shi claims he is always willing to invest in the squad. It may soon be time to prove it.

Although Sheffield United are flying high under Chris Wilder, maintaining their current league position is a tall task. Of the teams above Wolves in the table, the Blades are most likely to falter. Wolves must be ready to pounce.

Arsenal and Manchester United, currently 6th and 7th, boast deeper squads with more quality but have once again endured stuttering starts. Amazingly, Tottenham are 14th after a dozen matches. You can't expect them to be there in May but the problems under Mauricio Pochettino can only 'Spur' Wolves hope for a top-six finish.

Nuno's side proved they could beat each of those sides last season. Should the trio continue misfiring, the Wanderers are well-poised to capitalise.

If all their matches started after half-time, Wolves would be fourth. In stark contrast, they're 17th in the first half, on relegation's cusp. It's common knowledge scoring first drastically increases a side's chance to win. Slow starts may account for all the draws on Wolves' blotter. Nuno must find a way to send his squad out chomping at the bit. They need to get at opponents from the opening kick.

If they can, everything is there for them.

An experienced senior journalist, Alex has worked for multiple local English newspapers, including the North-West Evening Mail and the Hull Daily Mail.

He spent three years as a roving reporter before taking a career break in September 2019 to travel around South East Asia but that has not had an effect on his love for football. An impassioned Wolves fan, he has seen highs and lows at Molineux over the past few seasons but is now enjoying the Nuno reign.

He may be on his travels and hours ahead of the game on foreign soil but Alex still enjoys keeping tabs on everything that is happening on the pitch.

Claim to fame: Wolves captain Conor Coady used to be his next door neighbour.