Borussia Dortmund started the season on fire. In a league that has been dominated by Bayern Munich for more than half a decade, many saw it as a breath of fresh air. But the Bundesliga’s most successful club has now been let back in on the title race as Dortmund is witnessing a loss of momentum. Since losing the DFB-Pokal tie to Werder Bremen earlier this month in a match where the team threw away a three-goal lead to end up losing, the side has been out of sorts.

A 3-0 defeat away to Tottenham in the Champions League suggests it’s all over in the competition as well. That leaves the side with just the Bundesliga title to fight for. But with Bayern now just three points behind in the title race, it’s advantage FC Hollywood.

Lucien Favre’s men have themselves to blame for their problems, though. After back-to-back losses in two different competitions, the least that could have been done was to return to winning ways in the league against bottom side Nuremberg on Monday that would have kept the gap at the top of the table to a relatively comfortable five points. Instead, the team drew blanks against a hapless bottom team that has only kept two clean sheets all season. And those were against fellow relegation candidates Fortuna Düsseldorf and Hannover 96. This is the same side they put seven goals past without reply in the reverse fixture.

What this says is that Dortmund is in trouble. Winning the league title is now in doubt given the quality and ruthlessness of the opposition. Bayern did start the season rather poorly as new manager Niko Kovac adjusted to life at the Allianz Arena.  But having settled down, the former Eintracht Frankfurt gaffer has now put his side back on track. Ordinarily, that’s bad news for BVB. But shooting themselves on the foot by failing to live up to expectations only speeds up the negative outcome. 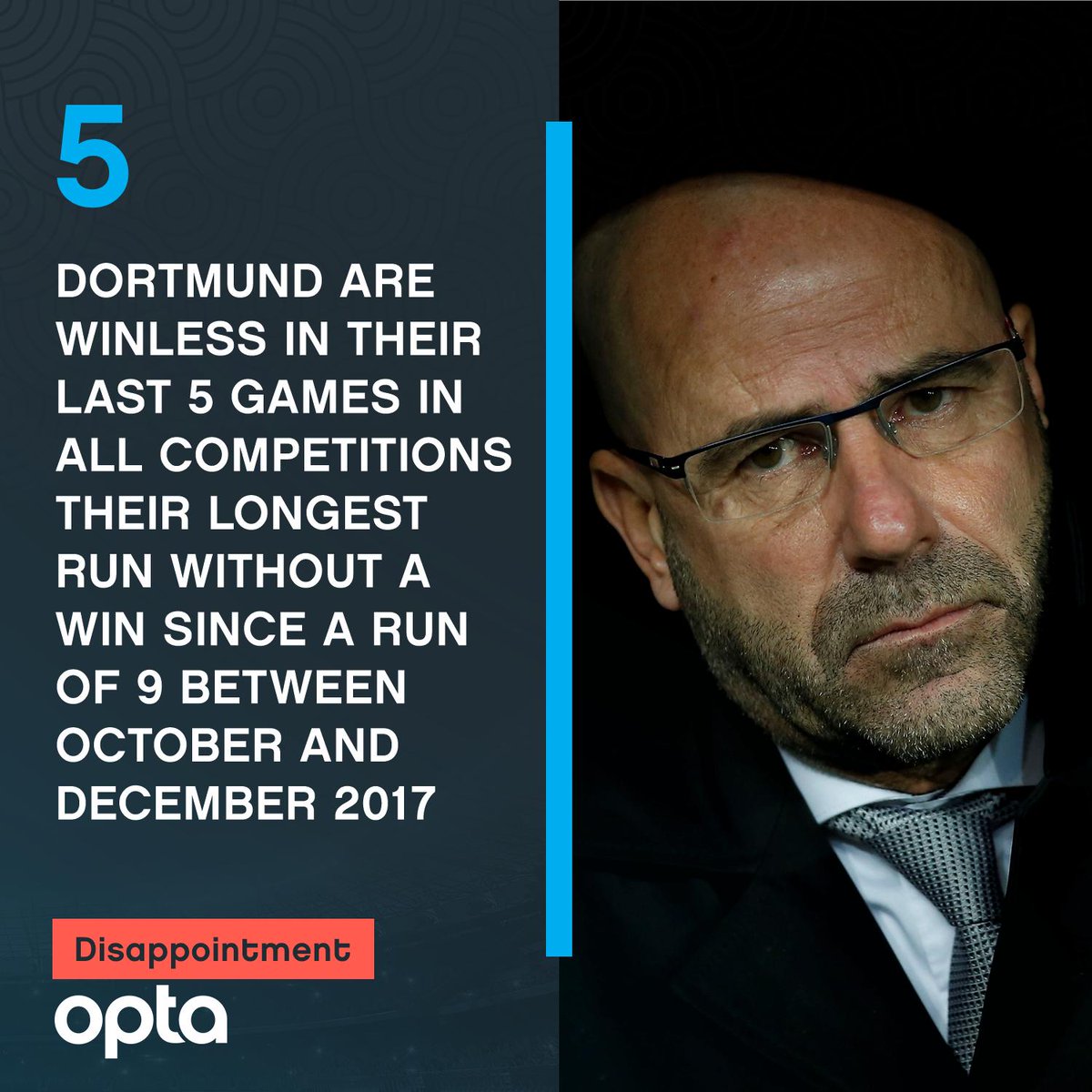 OptaFranz
OptaFranz
Follow
5⃣- Borussia #Dortmund are winless in their last 5 games in all competitions their longest run without a win since a run of 9 between October and December 2017 under manager Peter Bosz. Disappointment. #FCNBVB https://t.co/IFBNbeop8U
Follow
21:26 PM - 18th Feb 19
30
32

Unfortunately, injury has also played a part in all of these. Skipper and talisman Marco Reus has enjoyed a rich vein of form as he stayed injury free in the first part of the campaign. But suffering a thigh strain against Werder Bremen coincided with the team’s downward tumble. With 17 goals scored and 11 assists for the side this season, he has been at the center of the team’s performance so far. In fact, he has been Dortmund’s best player.

New signing Paco Alcacer who has rediscovered his goal-scoring touch with the German side has also spent considerable time on the sidelines which has affected the team in recent times. Right-back Lukasz Piszczek is also another injury miss as he nurses a heel problem. But blaming the team’s capitulation on injury would not be a good excuse as injuries are a part of the game and should be prepared for or at least the team should be able to readjust as necessary.

Reus took no part in the game at Tottenham and his absence was all too glaring. The team was torn apart by a rampant Spurs side that took full advantage of the situation.

Bayern may well do the same, even after the player returns. The reigning champions can smell blood now and sense the door of opportunity open. If Bayern seizes the opportunity and returns to the top of the table in the coming weeks, Dortmund will end the campaign empty-handed.