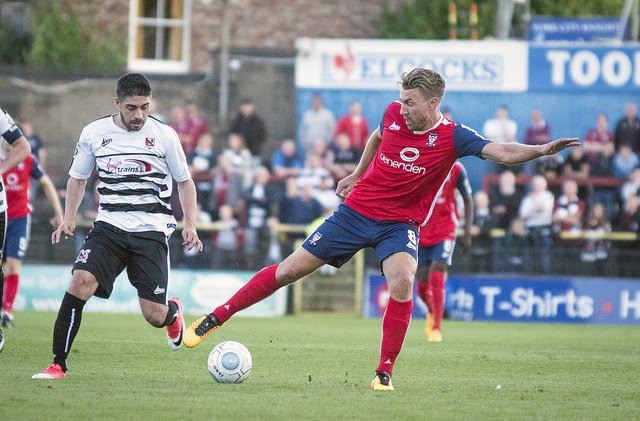 York City FC
YorkCityFC
Follow
Praise for City fans (last night's attendance 3,944 was the biggest in National League North so far this season).
https://t.co/v0Fq8JK4LR https://t.co/JSX4ViCJfp
Follow
14:09 PM - 16th Aug 17
23
84
On Tuesday night over 4,000 fans were in attendance for a game in the sixth tier of English football, as two ex-league clubs did battle.

The majority of 0-0's in football are boring drab affairs. this was not. A big crowd, the first meeting between the sides for years and some entertaining football.

York City and Darlington have both spent most of their footballing history at the bottom end of the Football League. However, both have slipped into Non-League football, this season meeting on two different paths.

Darlington was demoted to the Northern League (9th tier) in 2011 and have since been promoted in three of the last five seasons.

Whereas York City have suffered back-to-back relegations from League Two in the last two years.

The sides have always generated good crowds historically for their clashes and Tuesday was no exception. Just under 4,000 fans including over 1,000 away fans travelled to Bootham Crescent for one of the most anticipated clashes in the 2017/18 National North calendar.

Before the season started both were among the promotion favourites along with Salford City and Kidderminster Harriers. Both are looking good early bets. Before the fixture, Darlington was on nine points and York six from three matches each.

The majority of the first 45 minutes was one-way traffic as York pilled the pressure on the visitor's defence. Goalkeeper Adam Bartlett made several stops from close and long range to keep York out. When he couldn't in the final minute the bar came to his rescue as Michael Rankine's header crashed against the bar.At the other end, an early Mark Beck effort against the post was the best Darlington had to offer.

However, the big talking point was the Quakers defender Dom Collins surviving with only a yellow card on 11 minutes. Collins pulled back Amari Morgan-Smith who had him beaten for pace, the home crowd called for blood, but he escaped. Was there cover? From my seat on the half way line he was a very lucky boy.

Despite still being goalless the home crowd stood and applauded as much as I have seen at the interval of a 0-0 draw.

Second half an even affair

Thankfully for those who came down from the North East, Darlington improved after the break. A change in personnel due to injury and a change in formation worked the trick. The second period saw York dominate possession, but with slow movement off the ball and a well-disciplined defence, they were unable to break Darlington down.

The Quakers nearly stole the points with a couple of counter attacks. The closest they came was when midfielder David Syers hit the post, with sub Stephen Thompson also firing just off target.

York still had chances though, with a lot of pressure and corners. However, Bartlett was much less troubled.

Again there was one major talking point with Morgan-Smith going over in the box under a challenge from Leon Scott, but the referee waved away. It would have been soft, but so many of these are given.

When the final whistle went it will have been the visitors who were the happier. York will have been disappointed not to make the most of their first half dominance, but a point isn't a bad result for either.

York City has a strong squad and they showed their threat going forward. For Darlington, they remain unbeaten having already played potentially the two hardest games of the season, away to Salford and York City.

It is very early days and personally, I would still put Salford as title favourites, but both York and Darlington showed they will certainly push them all the way.